Esbjerg seeking a return to Budapest

Team Esbjerg failed to win the Danish league title in the 2021/22 season, losing the final against Odense Håndbold, but they are undoubtedly one of the main contenders in the EHF Champions League Women 2022/23 season.

Esbjerg are aiming to improve on their previous EHF Champions League outing, when they sealed their maiden EHF FINAL4 berth and finished fourth.

The Danish side boast two of the three top scorers from the previous season, six world champions in 2021 with Norway women's national team and a strong core, which has not undergone many changes in recent years.

Most important question: How will the Norwegian connection between Henny Reistad and Nora Mørk improve Esbjerg?

Esbjerg have morphed from rookies in the EHF Champions League Women into perennial contenders, having improved mightily on a season-by-season basis. However, their main undoing has been the lack of depth in the squad, which has affected the game plan set in motion by coach Jesper Jensen.

Esbjerg, who have replaced the four players that they lost this summer, look better suited to a title challenge this time around. It is not only about the experience and the chemistry of the squad, with the core remaining intact, but it also has something to do with the transfers they have made.

With the retirements of Marit Malm Frafjord and Line Jørgensen, Esbjerg lost on the experience front. But in line player Kathrine Heindahl, one of the best defenders in the competition, and Nora Mørk, one of the best scorers in the EHF Champions League, they have added some superb pieces.

Sure, Esbjerg still have some issues with the depth of their squad, but they boast seven Norwegian players, the core of the team that won the gold medal at the Women's EHF EURO 2020 and the 2021 IHF Women’s World Championship.

The connection between Nora Mørk and Henny Reistad will probably click in an instant, especially as the two know each other from the national team and scored 211 goals between them last season, being ranked second and third in the top goalscorer standings, behind Cristina Neagu. 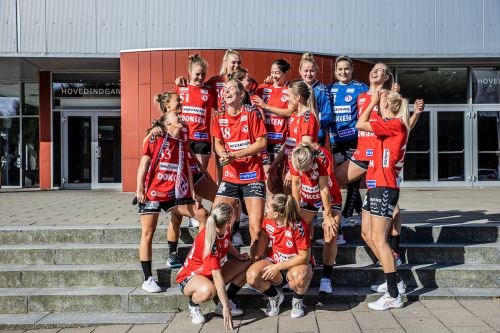 Under the spotlight: Nora Mørk

The 31-year-old right back spent the past two seasons at Vipers Kristiansand and won the EHF Champions League Women twice, titles number five and six for her in Europe's premier competition. Only three players – Ausra Fridrikas, Bojana Popovic and Katrine Lunde – have won the competition as many times as Mørk.

The Norwegian star will be entering her 14th season in the EHF Champions League Women and has already broken through the top 10 in the all-time goalscorer standings, with 711 goals. Barring an injury, she will probably climb three places, as she has scored at least 72 goals in each of the past two seasons.

Mørk is a natural scorer who can take penalties. The hectic schedule will take a toll, as the Danish league is one of the tightest in Europe, but Esbjerg undoubtedly made a serious coup when they convinced Mørk to sign for the eighth team in her career. The diminutive right back has also returned to Denmark, where she played for Aalborg DH in 2007.

How they rate themselves

Wanting more. Playing at the EHF FINAL4 last season only increased Esbjerg's appetite for success, as they produced superb performances to reach Budapest, only for their lack of experience to get the better of them at the business end of the season.

"Now that we saw what the EHF FINAL4 looks like, of course we want to get back there. And this season we really want more," said captain Mette Tranborg.

Esbjerg recorded nearly half of their 28 wins in the EHF Champions League Women – 11 – last season. From the teams that have played fewer than 60 games in Europe's top-flight competition, Esbjerg also have the most draws – seven.

What the numbers say

6 – the number of titles won by Nora Mørk. If Esbjerg secure the trophy, Mørk will become the player with the most titles in the EHF Champions League Women.

GROUP B REVIEW: Rapid remained unbeaten on their home court after clinching a clear 28:22 win over Kastamonu to stay in the hunt for a quart…