The pathway for the anniversary 30th season of the EHF Champions League Men has been outlined. The group phase draw on Friday in Vienna divided all 16 participants of the 2022/23 season into two groups.

Record 10-time champions Barça will face a fierce resistance in their title defence already in the group phase. In their group B, they will not only meet their opponents from the previous season's final Lomza Industria Kielce again, but also German heavyweights THW Kiel, Hungarian champions Pick Szeged, or the star-studded Danish side Aalborg Håndbold.

While group B combines for 16 EHF Champions League titles from the previous 29 seasons (10x Barça, 4x Kiel, 1x Kielce, 1x Celje), there is just one former winner of the European top flight in group A – SC Magdeburg won the trophy back in 2002 and are making a return to the continent's premium competition after 17 long years. 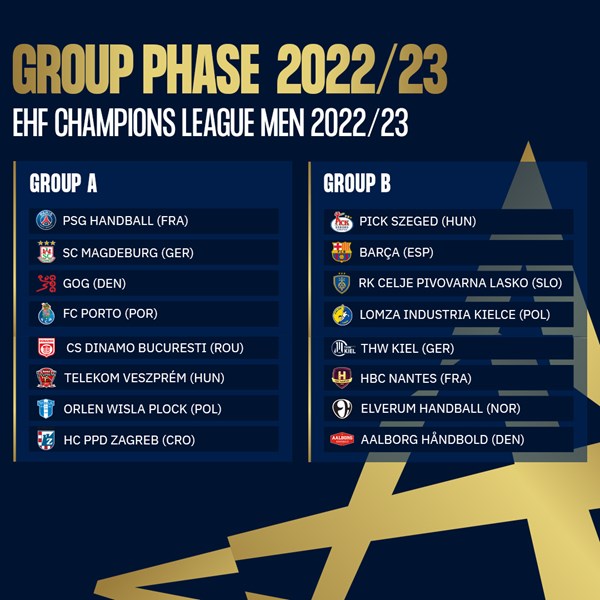 The draw was conducted by the EHF President Michael Wiederer together with the EHF Chief Sport Officer Markus Glaser.

For 2022/23, the competition format remains the same as in the past two seasons: two groups of eight teams each, with the top-six ranked teams qualifying for the knockout phase. Both the group winners and runners-up from each group will be heading directly into the quarter-finals, and the teams ranked third through sixth will advance to the play-offs.

The first playing day for the EHF Champions League Men on Wednesday 14 September 2022 and the anniversary season will culminate at the EHF FINAL4 on 17-18 June at the LANXESS arena in Cologne, Germany.

The match schedule of both groups will be announced in due time.

COUNTDOWN #10: Krim Mercator Ljubljana (SLO). The former two-time champions are ambitious after their 2021/22 run to the quarter-finals

“Europe will see who Rapid really are”

Czech champions making the Most of it

COUNTDOWN #12: DHK Banik Most (CZE). Most return after three seasons, facing a challenge with limited experience in the top tier

Second time the charm for Pascual and Dinamo?

COUNTDOWN #13: C.S. Dinamo Bucuresti (ROU). In the second season of the Xavi Pascual project, the Romanian side aim for the next step

Buducnost aim to get back on track

COUNTDOWN #14: Elverum Handball (NOR). After reaching the play-offs in the last two seasons, Elverum are ready for more

NEWS: The playing times for the first 10 rounds of the new season in the men’s top tier have been confirmed

COUNTDOWN #14: Storhamar Handball Elite (NOR). Storhamar are the only team to debut in the EHF Champions League Women this season

COUNTDOWN #15: HBC Nantes (FRA). After a one-season absence, the French side are back in the EHF Champions League and ready to amaze again