Match number 188 had already been THE emotional highlight, but match number 193 shall bring the “crown of my career”: Jovanka Radicevic could not predict, how long she might sleep before the bronze final of the EHF EURO 2024, because of all those emotions, but also the anticipation before her last match for the Montenegrin national team on Sunday (17:45 CET, live on EHFTV) against France: “In this tournament there were not more than three nights when I slept more than five hours. After the semi-final I could not sleep until four in the morning, but after losing such a game it is normal.”

On 9 November, 4000 fans gave her standing ovations in Moraca Arena in Podgorica, and were chanting for Jovanka Radicevic, they hold a huge banner on top of the arena: “Love until the last breath, Jovanka Orleanka” (Joan of Arc).

The 36-year-old right wing was crying when she received two framed shirts with her number 4 and one with a 1000, for more than 1,000 goals for the national team, including 208 strikes at EHF EURO events by now. The following match against Poland was the last international match on home ground for Radicevic – and one thought that she would be overwhelmed by emotions, was wrong: she scored twelve goals from 13 attempts, and of course was the hero of the night in her 188th international match.

Then Jovanka Radicevic continued on her path. “It was my dream that my girls would bring me to the final weekend in Ljubljana, and they made my dream become reality.” On Friday night, Montenegro lost their semi-final against Denmark, on Sunday, “Joka” plays for the bronze medal. No Hollywood director could write a better script.

In 2012, Radicevic won the silver medal at the London Olympic Games and became EHF EURO champion in Belgrade, a few months later, she won the EHF Champions League with Györ. On Sunday, her farewell match will be another home match, as she now plays for Krim in Ljubljana. And despite finishing her career in the national team, she will continue with the club: “My plan is one more season,” Radicevic says.

For her coach Bojana Popovic, this is a good decision, not to leave the sport completely: “We will still see Jovanka on court. This is good for the whole world of handball. We will have new players in the national team, but it will be difficult to find players like her with the same energy and emotions. I would be extremely happy, if she can make her dream come true to win a medal in her last national team match.”

But will Sunday really be the end? What if Montenegro qualify for the Olympic Games in Paris? “Like for me, Olympic Games are always a point to think about a comeback. Maybe Jovanka will come back to do something great again,” says Popovic, who had finished her career after the London Olympic Games and had her comeback four years later at the Rio Olympic Games – even as Montenegrin flag bearer.

Jovanka Radicevic, who was flag bearer of Montenegro at the Tokyo Olympics in 2021, has completely different thoughts about 2024: “Of course, I will come to Paris. But with my kids, I go for shopping and support my team.”

And she has already planned her time after playing handball – she wants to open a beauty salon: “Beauty things are interesting for me. We are women, we take care of this, we want to look nice, and when I finish my handball career I will go in the beauty business.” But before this, she eagerly wants to fulfil her “bronze-will-shine-like-gold” mission in Ljubljana. 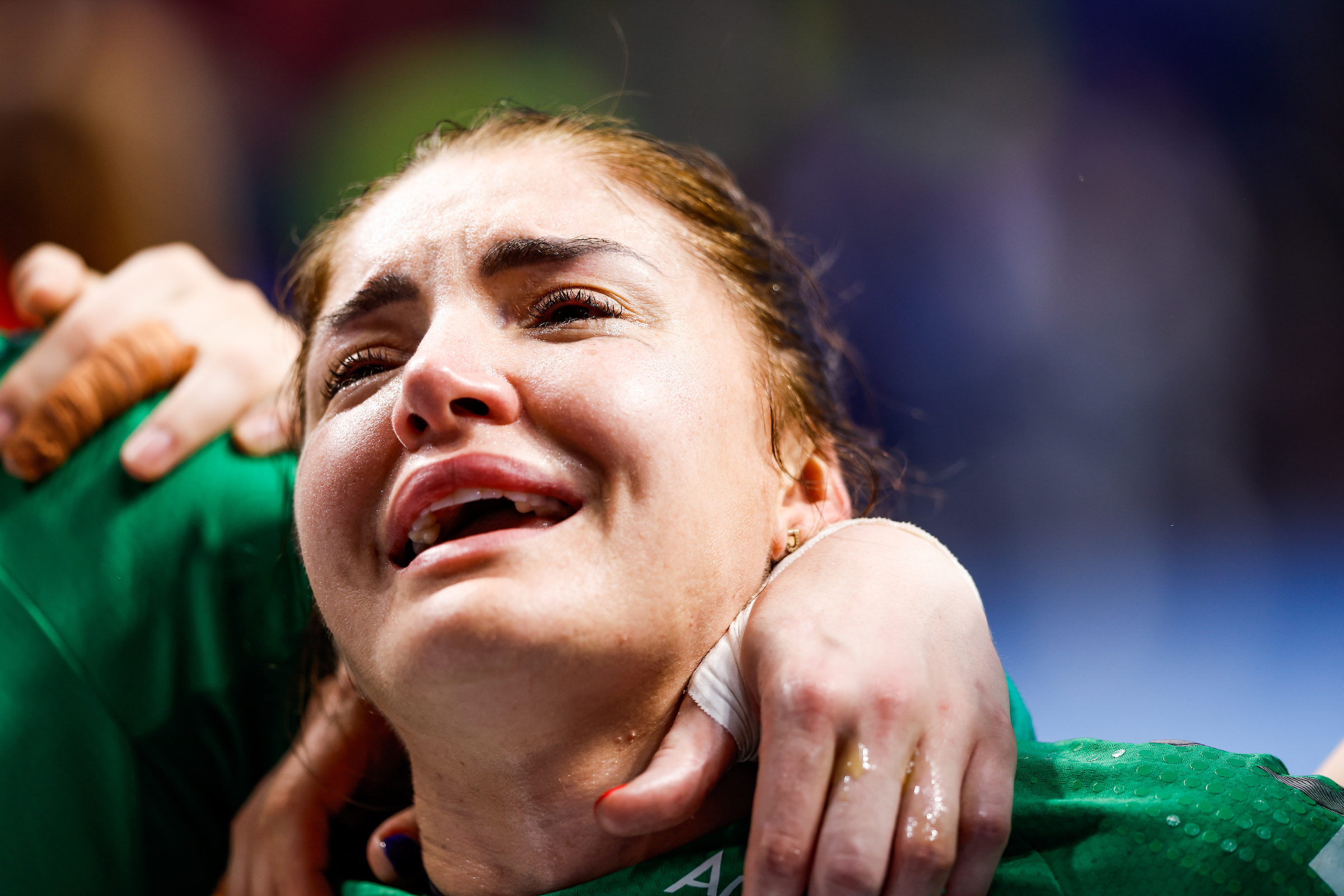 A medal in the last match would be the crown on my career after all those games. The Montenegrin jersey and those girls in the national team mean everything to me. I stay with them more time than with my family. Sunday will be the best moment to leave. But I will have mixed emotions, of course, I will be a little bit sad, but I need to control myself. But in the end, a bronze medal will shine like gold, if we make it.
Jovanka Radicevic
right wing of Montenegro

“I have enjoyed this EHF EURO so much. it was great to play the first round at home, and I was sad that we could not continue there, but our fans came to Skopje, they came to Ljubljana, they go everywhere. I have never experienced fans like ours, how they support the team with such great emotions”, Radicevic said on Saturday. Her expectations for the match against France: “We need to stand up and fight. A bronze medal for us would shine like gold. Just see which teams we left behind: Netherlands, Sweden, Romania, big nations, we need to be proud.”

Pride is something very special for the right wing, who celebrates goals like no other, who is emotional on and off the court like no other. “A medal in the last match would be the crown on my career after all those games. The Montenegrin jersey and those girls in the national team mean everything to me. I stay with them more time than with my family. Sunday will be the best moment to leave. But I will have mixed emotions, of course, I will be a little bit sad, but I need to control myself. But in the end, a bronze medal will shine like gold, if we make it.”

BRONZE-MEDAL MATCH REVIEW: Montenegro took their first medal in any competition after a decade-long wait, as they defeated France 27:25

“There is still a medal to play for”

BRONZE MATCH PREVIEW: Like in the preliminary round, France and Montenegro will meet – this time for bronze