On Saturday, CS Minaur Baia Mare and Drammen HK both took a step towards the final of the EHF European Cup Men 2021/22. In the first leg of the semi-finals, they recorded home wins against Alingsås HK and Nærbø IL respectively. 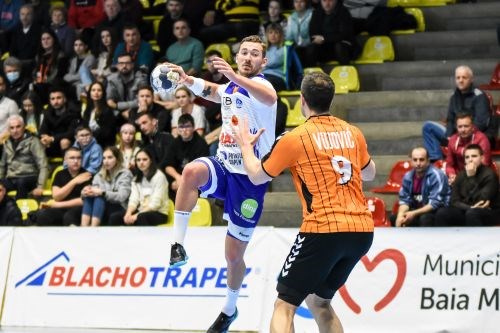 10 minutes into the game in Romania, Alingsås were in front 7:5, but Baia Mare then responded with a 7:0 run and never gave up their lead afterwards.

The Romanian side were up 19:12 at the break and ultimately cruised to a six-goal victory, so the Swedish team will need a strong comeback at home next weekend.

Next Article Hungary easily finish on top of group 5

ROUND REVIEW: impressive comebacks and post-match shootouts helped to determine all participants of round 2

ROUND PREVIEW: Round 1 of the EHF European Cup Men 2022/23 will be completed this weekend

SEMI-FINAL PREVIEW: Baia Mare and Drammen want to reach the final, but Alingsås and Nærbø are not planning to throw in the towel

SEMI-FINAL REVIEW: a three-goal home win was not enough for Alingsås, as their Romanian rivals progressed to the final

Vestmannaeyjar, Zubri and Gracanica progress to round 2

ROUND REVIEW: Three teams secured their progression following wins in double-headers, while the Italian derby is still open after the first…

EHF European Cup Men to throw off on Friday

ROUND PREVIEW: Three round 2 participants will be confirmed following the double-headers in the opening round this weekend

DRAW REVIEW: Defending champions Nærbø IL discovered their possible round 2 opponents during Tuesday's draw at the EHF Office in Vienna

NEWS: The draw for round 2 of the EHF European Cup Men 2022/23 will take place at the EHF Office on Tuesday 6 September

FINAL PREVIEW: The Romanian side chase a four-goal deficit against the debutants from Norway in the second leg on Saturday