The brand-new trophy for the Beach Handball Champions Cup has been revealed, ahead of the competition that takes place at the end of October.

The winners of the men’s and women’s competitions will lift the recycled aluminium trophy at the end of the tournament in Porto Santo that runs from 20-23 October.

Spanish agency OiKo Design Office designed the trophies, the same company that designed and produced the stunning EHF Champions League trophies. It is constructed from aluminium recycled from industrial waste, and its special geometry prevents it from overheating.

Designers Salva Codinach and Jose F. López- Aguilar from OiKo Design Office said the EHF's aim was to design a distinctive and recognisable trophy which represented the values of the competition: spectacular and acrobatic, fast and clever, active and respectful, and honest and fair. 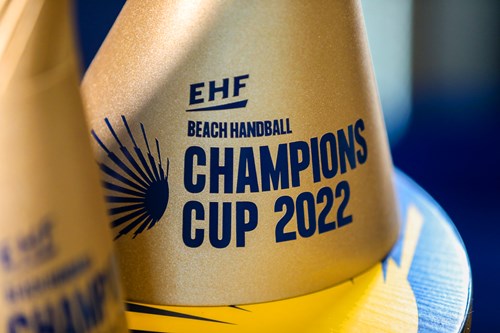 “From the beginning we were excited about the way EHF was approaching graphic communication for beach handball and we saw that the logo itself already had a strength that we could harness. We started working with the idea of giving volume and three-dimensional dynamism to that logo,” Codinach said.

“We saw that by twisting the geometry of the logo and narrowing it in the grip area we achieved a very dynamic and sexy volume. The upper face is inclined at 40 degrees so that the logo is recognisable from a frontal view.”

López-Aguilar said the ‘heatsink’ element of the trophy was the most interesting aspect. It dissipates the heat accumulated by being exposed to sun on the beach.

Some people say the ball is still in the air... 😅🔝#BeachHandball 🏝️ pic.twitter.com/gM3ZtZ2iim

Once approved by the EHF, it took around four to six weeks to develop the trophy and produce prototypes. After that, it takes approximately eight weeks to produce the trophies including painting and graphic application. 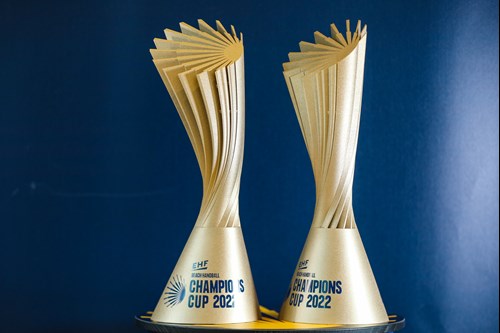 “One of the challenges at the production level has been to find a process and a material that would allow this complex volume to be built with the right resistance and finish. Finally, with a sintering process of a technical polymer, in combination with metallic elements and internal ribs, we have achieved the result we wanted,” López-Aguilar said.

“Another quite challenging aspect of this trophy, although it may seem simple, is the graphic application work, which is done manually with the help of templates.”

The trophies will be lifted by one of the 16 men’s and 16 women’s teams who are participating in the Champions Cup.

FEATURE: We sat down with Renáta Csiki a big name in the Hungarian beach handball scene and on the international stage and talk her past, in…

FACTS & FIGURES: On the eve of 2023, we take a look at the EHF beach handball year that was

NEWS: It is time to start planning for the new EBT season with registration for teams and organisers now open