“Our fans will be an additional player”

The 16 participants of the Women’s EHF EURO 2022 know their opponents after the draw event at Ljubljana Castle on Thursday, and in the three host countries – Slovenia, Montenegro and North Macedonia – the anticipation is huge for this first-ever Women’s EHF EURO, organised by three countries.

Four national team players conducted the draw and had the fate of all EHF EURO participants in their hands: Ana Gros (SLO), Tatjana Brnovic (MNE), Andrea Sedloska (MKD), and Szimonetta Planeta (HUN). And they composed four amazing groups for the preliminary round.

Though Hungary is no host, Planeta hopes for a kind of home atmosphere in Ljubljana, where her side will face defending champions Norway, EHF EURO debutants Switzerland and 2020 bronze medallists Croatia: “The Hungarian fans are crazy about handball, they support us everywhere. Now we play at Ljubljana and we are expecting a lot of our fans.” After becoming group winners in qualification, the hopes of this Hungarian side are high for the upcoming EHF EURO 2022: “We have a lot of young and talented players in our team, and the more you play together, the better you get. So maybe it is a good time for us to win a medal,” said Planeta.

🗣️ Ana Gros: “Our fans will be and additional player!”

Montenegrin star Tatjana Brnovic had something like a home match at Ljubljana, as now she plays for local side Krim. In group D, Montenegro will host Poland, Germany and Spain in the famous Moraca arena in Podgorica – and Brnovic was satisfied with the draw: “We got a good group, facing opponents which we know and have played against them many times – but of course at an EHF EURO every group is hard. I do not expect us to be the favourite, what I can expect is that we give the best we can on the court and enjoy the matches with our amazing fans. The fans are our big plus in our ambition to win every game in Podgorica.”

Ten years after becoming EHF EURO champions 2012 in Belgrade, the hopes are high for more magic moments in 2022: “Making it to the final weekend in Ljubljana would be our perfect scenario. If we take some points from the preliminary round to the main round in Skopje, I am sure anything is possible, though we only expect tight games. A medal would be our great dream,” said Brnovic.

Of course, all eyes at Ljubljana Castle were on Slovenian superstar Ana Gros – the 2020/21 top scorer of the EHF Champions League, who just returned to Krim Ljubljana, shall steer the Slovenians to a top result on home court. But facing former EHF EURO champions Denmark, Sweden and Serbia are no easy tasks in group B in Celje: “There are no easy opponents in any group, we will fight as we have the goal to proceed to the main round in Ljubljana. Even though we have to duel with some big teams, I believe in our team,” says Gros, adding: “There is no favourite in our group, though Denmark are a very strong team and stand out a little bit, as they won the bronze medal at the last World Championship. But everything depends on the daily form.” 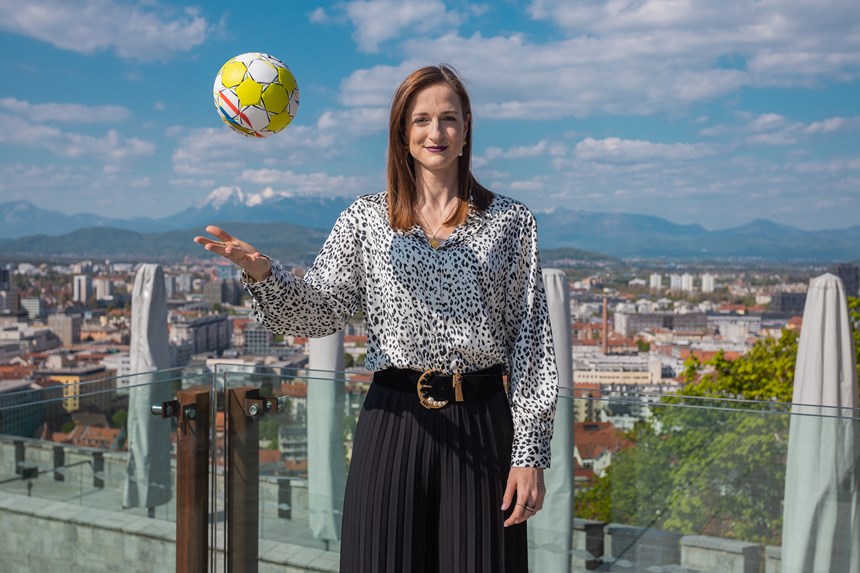 But mainly, for the Slovenia and Krim right back, and her teammates, a dream is going to come true in November: “I am so happy and so proud to play such a big tournament on home court, with our home fans. We will have special moments, as in a career of a player it is very rare to play a tournament like this in your home country, many do not even have the chance to do so. Our team is looking forward to this EHF EURO.”
Slovenia’s X-factor shall be the supporters, as Gros hopes: “We played so many matches in Celje, like all our qualification games, and we know that the fans will come in a big number to support us. We expect a really good atmosphere. But being realistic, it is really hard for our team to make it to the final, so we go step by step and game by game.”

Right after the draw, Macedonian player Andrea Sedloska had to rush to Zagreb and to her club Lokomotiva to prepare for the next match. In her place Zhivko Mukaetov, the President of the North Macedonian Federation talked about the chances and anticipation of his side, which will face the top teams France, Netherlands and Romania in the preliminary round at Skopje. 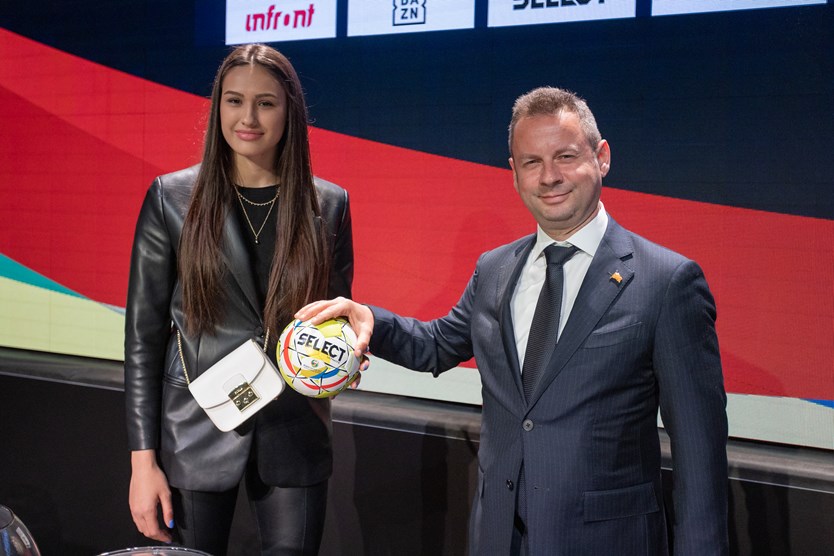 “We are very proud and more than happy to organise the next Women’s European Championship after 2008. Our girls are very happy to play at home, and to be part of this event - they want to give their maximum. What this maximum is, we will see. We are always optimistic, no matter how tough this group is.” Like Gros and Brnovic, Mukaetov hopes for huge support from the stands: “We know that our fans are like an additional player for us. They showed many times how they can help our national team, and I am sure it will be very, very loud in Boris Trajkovski Arena.”

The EHF EURO 2022 will start on 4 November, the new champions will be crowned on 20 November in the Stožice Arena in Ljubljana – and will be the first women’s handball team to qualify for the 2024 Olympic Games in Paris – besides hosts France.

The top three teams from each preliminary round group will qualify for the main round, which will be hosted in Ljubljana and Skopje before the final weekend in the Stožice Arena, Ljubljana. The Women's EHF EURO 2022 will be the last continental championship to be played with 16 teams before its expansion to 24 teams in 2024.

Fans can get their hands on tickets for the event via the EHF's ticket platform here.

NEWS: The EHF has announced its list of referees in charge of the matches at the European Championship in November

NEWS: The official song of the Women's EHF EURO 2022 is here! Slovenian singer-songwriter Senidah aims "to connect all women with the song"

NEWS: The opening match of the Men’s EHF EURO 2024 in Dusseldorf aims for a world record attendance – and tickets are available now

FINAL REVIEW: Cousins Tord and Andreas Haugseng score more than half of Nærbø's goals as Norwegian team build a four-goal advantage in Stava…

NEWS: Want to be part of a world record or see the Men’s EHF EURO 2024 title decided? Get your tickets now

MEDIA INFORMATION: Tickets to go on sale to mark 600 days before the start of Men’s EHF EURO 2024 in Germany – including a world-record atte…

FEATURE: After more than two decades in their national team jersey, Yeliz Özel and Sevilay İmamoğlu Öcal were honoured for their extraordina…

NEWS: Time to secure your seats for the November’s championship in Slovenia, North Macedonia and Montenegro

NEWS: The European Handball Federations has published the playing times for the Women’s EHF EURO 2022 with co-hosts Slovenia facing Denmark…