Teams at the starting blocks for ebt Finals in Sicily

The best that Europe’s beach handball can offer will turn their attention to Isola delle Femmine on 9-12 June for the European Beach Handball Tour Finals.

It will be a first for the Sicilian town when 13 women’s teams and 16 men’s teams take to court in the effort to lift one of the most coveted beach handball titles.

At this year's edition of the ebt Finals it will be Hei Beachhandball from Denmark who will be looking to retain their title while GEA AM TEAM ALMERIA aim to hold onto theirs in the women’s category.

13 teams make up the women’s competition with the teams being divided into three groups. Group A is hosting five teams and the other two preliminary groups with four teams each. Seven nations will be represented: Spain, Netherlands, Portugal, Denmark, Italy, Hungary, and Germany with the host nation Italy boasting three teams.

GEA AM TEAM ALMERIA aiming to hold onto gold

Group A will be a sight to behold with last season's silver medallists Westsite Amsterdam and bronze medallists Team Blue Bee from Denmark coming head-to-head. ANDIMODA Team Messina will be hoping to benefit from some home support when they throw-off the opening day’s action on court 1 against Spain’s TRIANA XABIA BMP SEVILLA. Portugal will be represented by Escola de Formação de Espinho – Os Tigres and will be looking to improve on their 13th place last year.

Group B is home to the reigning champions, GEA AM TEAM ALMERIA but they face the stiff competition of Szentendrei from Hungary who are no strangers to the EBT scene as well local side Handball Erice and KRAS Volendam who want to build on their first-ever outing last year in Spain. But the clear favourites are the Spanish team, who won the ebt Finals in 2018 and 2019, and repeated their success after a nearly flawless tournament, dropping only one game on their way to the trophy in 2021.

Last season’s 5th place finishers and 2021 Champions cup winners, GRD Leça - Love Tiles, will be aiming for that top spot in group C but nothing is for certain with opposition in Standépitok Girls, CAIPIranhas and the Blue Team. Standépitok were disappointed last season when they bowed out in the quarter-finals 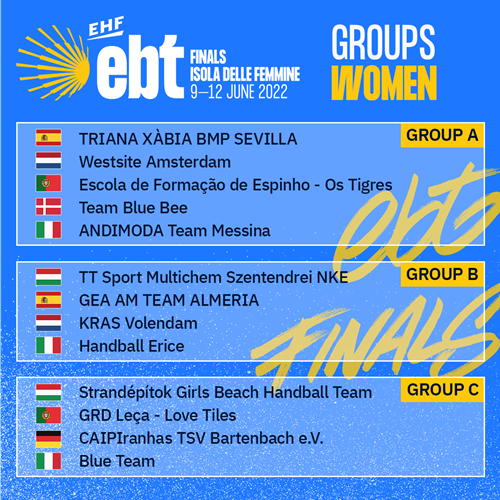 10 nations will be represented in the men’s category from Spain, Germany, Netherlands, Italy, Portugal, Denmark, Hungary, Poland, Switzerland and France. Spain and Portugal will be the most numerous with three teams each. We will have four groups of four played over the three courts.

In group A, two teams that know each other well from last year face again; 12 Monkeys Köln and Camelot Handball Tilburg come head-to-head once again with the German side looking to avenge their loss last season to the exciting Dutch side. The Group is completed by Spanish outfit MOVEX GRANOLLERS and local side C.u.s. Palermo.

Hir-Sat BHC and Os Tigres who performed well in last season’s Champions Cup will face in group B and the group is completed by the sole Polish and French sides at the competition in GRU JUKO Piotrków Trybunalski and TEAM TCHATCHEURS, both sides will be eager to make their mark on this year’s edition.

The development of Danish beach handball in recent years could be set to continue its upward trend if Hei Beachhandball have anything to say about it. The reigning champions from Denmark will be the hot favourites to take the top spot in group C, but with teams like BMP ALGECIRAS who always pack a punch and LX50 Handball and Blue Team, it is far from a stroll on the beach. 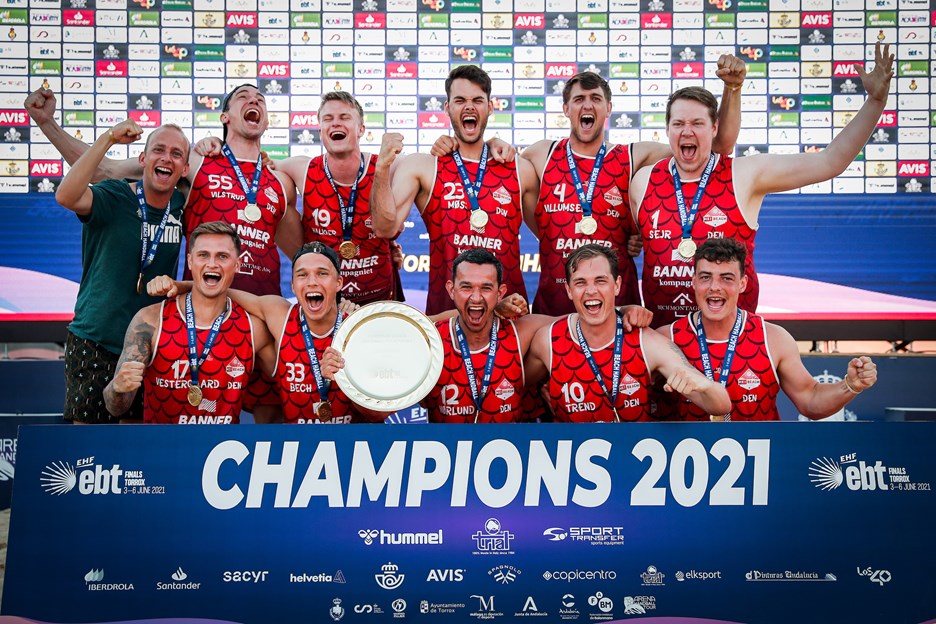 The Champions Cup winners, CBMP Ciudad de Málaga, seem to be the favourites heading into group D but anything can happen in this group completed by GRD Leça – Spar, Beachmopeten and BHV Wasserschloss. 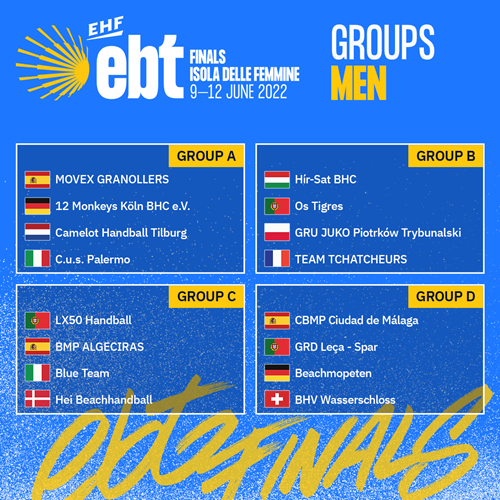 This year's edition will have a special glossy shine with two newly designed and 3D-printed trophies being awarded to the winners. The design was carefully planned with the elements of beach handball in mind with salt-based compounds added to avoid expansion contractures. Metallic paints and lacquers are used for a shiny finish, while natural beach sand with gloss particles provides the details. 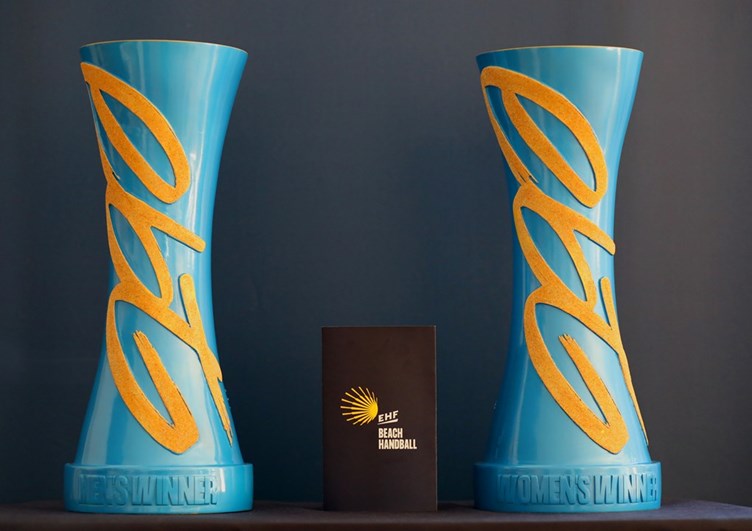 Read all about the new trophies HERE.

As well as live coverage on Twitch, beach handball fans will also be able to keep up to date with the action at the ebt Finals with daily coverage on eurohandball.com and the Home of Handball social media channels.

Next Article “You can win the Champions League, but no one did it this way”

REVIEW: Both the men’s and women’s team beat Spain in the final of the Beach Handball EURO in Prague

Summer blog: Austrian-Czech final in Varna; Crunch time at b…

SUMMER BLOG: Running coverage of all EHF events in the packed YAC and beach handball summer of 2022